From classroom to boardroom

24%: that is the proportion of the most senior roles in businesses across the globe held by women.

We have been tracking this figure over the past decade and are sorry to report there has been no significant movement. In fact, the figure is unchanged from 2013, and the same as 2009 and 2007, suggesting that women’s ascent up the corporate ladder has returned to its ‘natural level’ following the financial crisis, during which women were disproportionately hit.

The debate about women’s in business leadership continues with quotas for the proportion of women on boards in the EU a very real prospect. But is legislation the answer? This year’s research found that business support for quotas increased globally to 45%, up from 37% 12 months ago. But the data also presented a number of actions businesses could take to support the career paths of women:

The 2014 women in business report, ‘From classroom to boardroom’, follows the careers paths of women across the globe, asking where the key barriers are and how these can be overcome. Key highlights include: 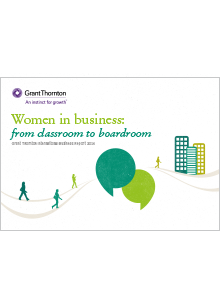