Second edition in the series

In the second of our Future of Europe series, we look at three aspects of the sovereign debt crisis: the stagnation of the region’s economies, closer integration and the future expansion of Europe.

Drawing on interviews with senior executives in and around Europe, the report explores how recent political and economic upheavals have left the future of Europe delicately poised.

Although feelings were positive at the 2013 World Economic Forum in Davos, growth prospects remain weak, with the European Central Bank forecasting a contraction of -0.5% during 2013.

Is there any good news? On a positive note, 2012 saw the completion of the largest sovereign debt restructuring in history as 86% of investors holding private Greek debt agreed to a write-off deal.

Other key findings from the report 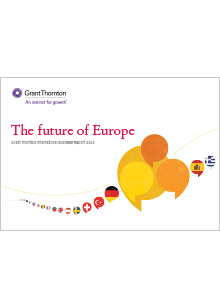