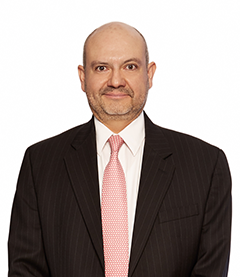 Ricardo is a graduate of the Instituto Tecnologico Autonomo de Mexico (ITAM) where he obtained his degree in Public Accounting in 1991.

He began his professional tax practice in Chevez, Ruiz, Zamarripa, where he was a tax manager.Then he worked for JP Morgan, as tax manager.As a manager in Deloitte he began the Transfer Pricing Practice in 1997. From 1999 to 2006 he was one of the top billing partners nationwide.

In 2007 he starts the Transfer Pricing Practice in Ortiz, Sosa, Ysusi y Cía., S.C. (OSY) having an alliance with Ceteris, a US based Firm specialized in TP and Valuation services. OSY’s TP team was recognized by the International Tax Review, as one of the best Mexican TP Firms in Mexico.

In 2011, he starts his professional practice in Salles, Sainz – Grant Thornton, S.C. as Partner in Charge of the Transfer Pricing Practice.

Ricardo has been appointed for several years as one of the leading advisors in the field by the magazine "International Tax Review."

He was included in the 2009 edition of the journal "Expert Guides, The Best of the Best" as one of the best advisers in the world in his field.

Ricardo has undertook several courses, such as ITAM-Harvard International Tax postgraduate, Program D-1 (Management) in the IPADE and "Business Perspectives” Program at IMD in Lausanne, Switzerland.

Ricardo has the following teaching and forums experience:

Ricardo was the first Chairman of the Transfer Pricing Committee of the Mexican Institute of CPAs (2005-2007).

He was invited by the International Tax Review for the 2008/09 edition in the Mexican chapter "Transfer Pricing Review".

He is the author of the chapter in Transfer Pricing published in 2008 by the Mexican Institute of CPA´s.